Although this building is no longer part of the active railroad station, it has a history of connecting people dating back to the late 19th century. It was built in 1881 as a replacement for the Pennsylvania Reading Railroad’s Centennial Station, which was located on 32nd & Market Streets. It turned out to be so successful that it was later expanded, with intricate designs by the architect Frank Furness.
During the 1920’s, as the city was booming with people and businesses, the Reading hired Horace Trumbauer to rebuild this station in the Neoclassical style, along with his chief designer Julian Abele, who was the first African American to graduate the University of Pennsylvania’s School of Architecture. Construction of this building cost $2 million to include large columns, giant chandeliers, and pink marble on the floors. It was opened on September 30, 1929 and was a symbol of expansion until the stock market crash, which happened a month later and catalyzed the Great Depression. Due to the state of the economy during the 30’s, many factories and businesses moved away from this area and the station became too expensive to operate. The site was then put up for sale in 1960 for $181,000.
It was later renovated by Volunteers of America who created 108 housing units for people transitioning out of homeless shelters. Today it is a halfway house for people ending their prison sentences. 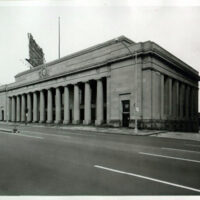 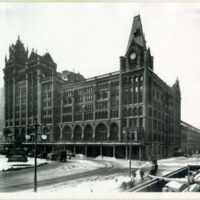