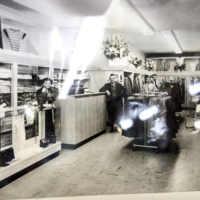 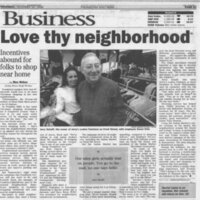 Jerry’s Ladies Fashions occupied this double-wide storefront at 2900 North 5th Street until just a few years ago. Jerry’s was one of three businesses on this block owned and operated by the Schaff family during the 20th century. Jerry’s brother Nathaniel sold men’s and boy’s clothing in his store and their other brother, Murray, operated a variety store specializing in curtains and drapes. The brothers inherited the businesses from their parents, Samuel and Sarah, who owned property on this block as early as 1957. The Schaff family were committed members of their community who aimed to help their community thrive. Jerry’s Fashions even participated in a program providing summer work opportunities to disadvantaged youth every year between 1988 and 1999. In 1981, Jerry’s also hosted a concert played by “La Nueva Contraria” as part of a summer-long neighborhood music festival.

Murray Schaff’s influence was even further reaching. Before he took over operation of his parents’ variety shop in 1983, Murray had a successful career as a musician and night-club owner. As a boy of 14, Murray played alto saxophone and sang with an early rock group called the Treniers. In 1940, he formed a group of his own, the Aristocrats, which travelled the country and shared stages with such stars as Ella Fitzgerald, Tony Bennett, and Eartha Kitt. His New York City nightclub, “The Open End,” was frequented by celebrities and athletes, including Joe Namath of the New York Jets.

Jerry’s son Kevin has taken over the family business and you can visit the store at its current location, just a few blocks away at 3251 N. Front Street. Also visit online at jerrysfashions.com.

"And Jerry’s in the corner of 5th and Cambria, they were there forever and a year and a half ago they closed down. And they were there before we moved because his grandparents first had it, then his father took over, and then he took over, Kevin. And his father died, a month ago.  So sad because Jerry’s was a big ____. Even though they were Caucasian, they even spoke Spanish. They were on 5th and Cambria for more than 45 years, before we moved around. It used to be a second hand store. They started buying the clothes from the style and that store came up. They used to have really realy nice, beautiful clothes. The nicest shoes and _____. They had 3 stores: Front and Dauphin, 3rd and Dauphin,  and the one on 5th and Cambria. They closed the one on 5th and Cambria."