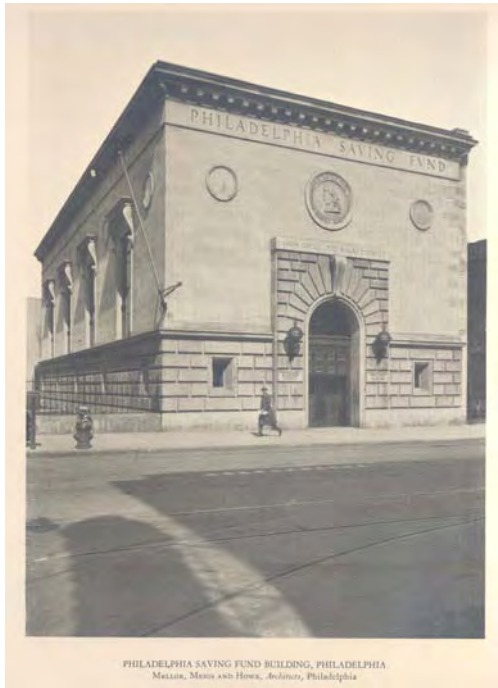 Photograph of this PSFS Bank Branch¹

This building was constructed from 1923-24 for the Philadelphia Savings Fund Society (PSFS), along with four other bank branches across the city¹. PSFS was established by a group of merchants as a member-owned cooperative in 1816, meaning that those owning savings funds accounts with PSFS act as voting members in any business decisions². Mutually owned cooperative banks thrived until the 1980s when changes in the regulatory environment increased competition between financial industries². PSFS was established to “promote economy and the practice of saving amongst the poor and laboring classes of the community… and to render them in a great degree independent of the bounty of others”¹. The word ‘bank’ was deliberately avoided in the title due to public suspicion of traditional financial institutions². 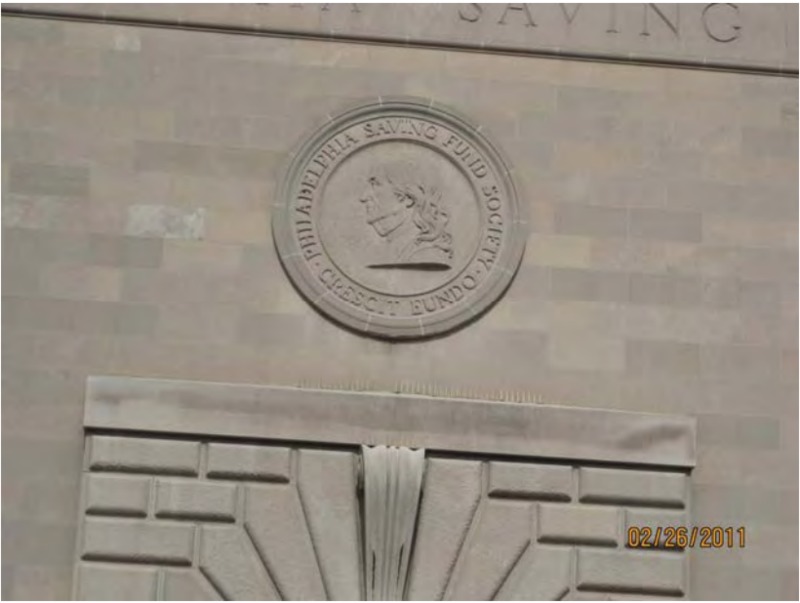 In 2011, this bank branch was nominated for the Philadelphia Register of Historic Places¹. The applicant, Janet Grace, described the building as having significant character and reflecting an area of architectural styles¹. Its architect, George Howe, propelled his career through this project. After Howe’s firm designed these first few bank branches, PSFS contracted him to design the PSFS tower in downtown Philadelphia. Located at 1200 Market Street, this building was the first designed in International Style in the United States. International Style typically features buildings with flat surfaces and alternating areas of glass³. 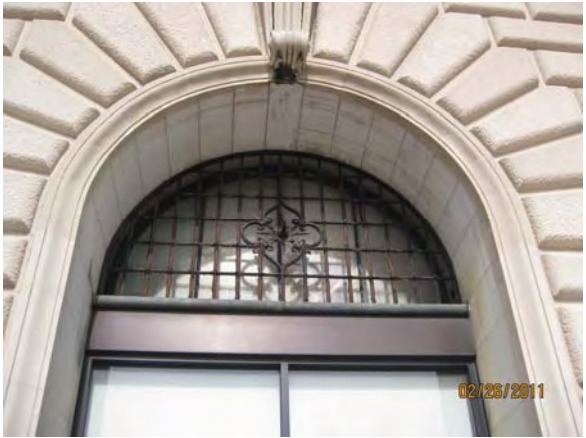 This bank, designed by Howe, stands today almost entirely as it did in the 1920s. It was designed in the Renaissance Revival Style¹, which draws inspiration from a wide range of classical Italian architectural and artistic styles⁴. The bank stands on a black and white granite base, giving way to the main body that is finished with limestone cladding¹. Various marbles are used in the upper parts of the building as embellishments¹. At the top of the front-facing wall, there is a large limestone slab engraved with, ‘The Oldest Savings Bank in the United States Founded 1816”¹. The bank also features ironwork fashioned by Samuel Yellin, a famous Philadelphian ironworker in this period¹. Howe designed banks in grand styles to invoke a sense of awe and security in depositors. His earliest branches, like this one, were styled like that of a “magnified strongbox” ¹. This architecture is certainly impressive, standing today as it did when built.

During the 20th century, PSFS saw major growth. As a cooperatively held bank, PSFS sought to follow careful practices to avoid unnecessary financial risk². PSFS primarily invested in government bonds and mortgage-backed loans to be cautious with assets². PSFS realized the need to protect its largely immigrant member base by providing extra resources where necessary. For example, interpreters were hired to assist customers not speaking english². Additionally, the institution was known for being ready to pay out balances on short notice, expanding accessibility to services for customers². PSFS was also involved in local issues. For example, bank leaders donated to the City’s defense during the Civil War². Later in 1968, civil rights leader Cecil B. Moore partnered with PSFS President R. Stewart Rauch to bring black and white leaders together to form the Good Friday Group². This group raised over $1 million to support an array of social problems in an attempt to avoid additional city riots². In 1975, PSFS joined with two other banks in the Philadelphia Mortgage Plan with the explicit goal of lending in formerly redlined neighborhoods². 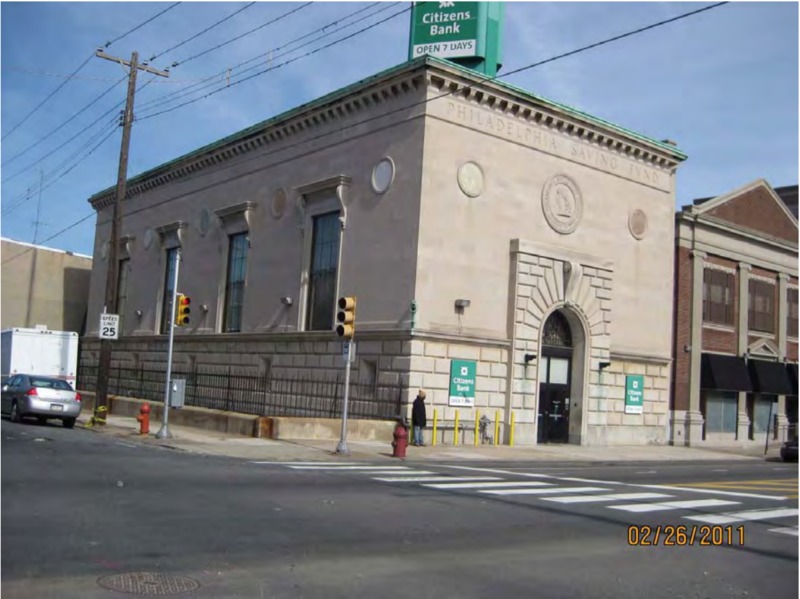 Bank as it stands today¹

With a priority on accessibility and long term stability, PSFS was able to grow into the largest mutual savings bank in the US by the 1980s². PSFS quickly absorbed the Western Savings Fund Society and changed its name to Meritor Financial Group². However, the mutually-owned savings group struggled to adapt to deregulation in the banking environment². PSFS abandoned mutual ownership to become a publicly traded stock². Attempts to diversify investments were unprofitable, and PSFS was forced to sell 54 branches to Mellon Bank in 1989, including this location². In its prime, PSFS encouraged savings and homeownership, built significant infrastructure, and acted as a concerned corporate citizen. PSFS left a legacy on this building, which reopened as a Citizen’s Bank branch in 2001².