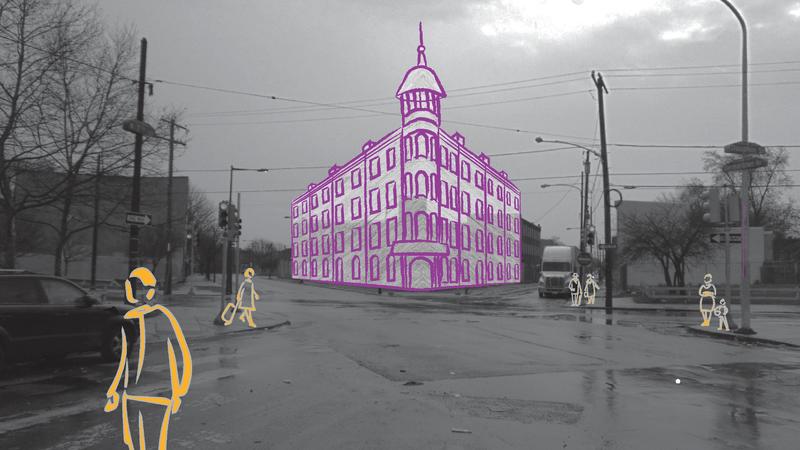 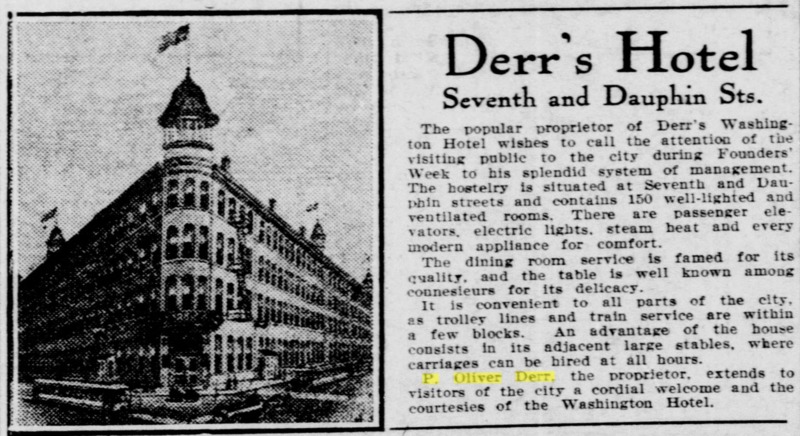 The first evidence of the hotel’s existence dates back to an Inquirer article in 1892. Exact dates for the hotel’s opening and construction were not accessible. The first owner was a family member of the late owner P. Oliver Derr who first began work at the hotel in his youth. By 1885 he had inherited the entirety of the property. The brick hotel had 150 rooms⁴, so it was fairly large at 4 stories. The architect of the hotel was Fredrick J. Ritter¹. Passenger elevators, electric lighting, steam heat and “every modern appliance for comfort” was offered to guests of the Derr’s hotel⁴.

In February of 1900, the Inquirer reported that Mr. Derr purchased a low-pressure steam heating outfit from Monitor Steam Generator Manufacturing Co for a livery-stable². Large stables adjacent to the building offered hired horse drawn carriages at any hour⁴. Additionally, Mr. Derr touted that his hotel’s dining was known for its quality meals and was accessible by trolley and train lines a mere few blocks away⁴. 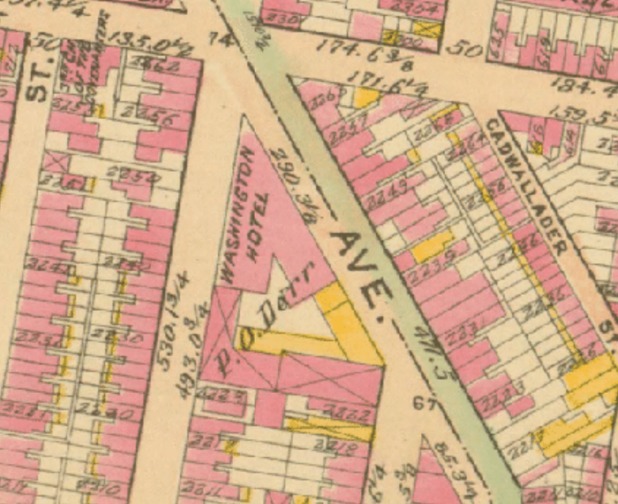 On Wednesday July 5th, 1893, a massive hail storm ripped through North Philadelphia. It resulted in substantial damage to the neighborhoods that stood in its wake including many on Germantown Avenue. One of the buildings was P. Oliver Derr’s Washington Hotel. Mr. Derr reported that the storm ripped off the structure’s tin roof and flung it into the yards of nearby neighbors. Over 200 windows were shattered and sprayed glass into many of the rooms. The storm was so sudden that there was a brief panic among hotel guests.

Local policemen arrived with precautionary ropes to tie off the area and to keep wandering pedestrians away from falling debris. Fortunately, while Mr. Derr estimated that losses would be between $2000 and $3000, no hotel guests were injured³.

End of an Era

In August of 1971 it seems as though the hotel went up for an absolute auction, typically done on foreclosed properties. The notice in the paper claimed an approximate weekly income on $1,500. Around a similar time, there were ads in the Philadelphia Daily News that advertised rooms by the day and week: $3 daily rates and $12 for the week¹.

Toward the tail end of the hotel’s life it was owned by the Metropolitan Hotel Corporation Group, which also was the proprietor of several other hotels including The Rittenhouse, 22nd and Chestnut, the Marilyn, and 40th and Walnut¹.