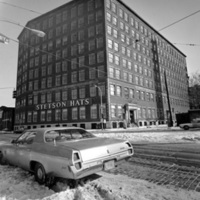 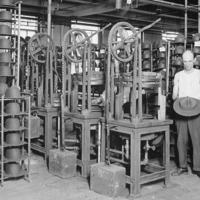 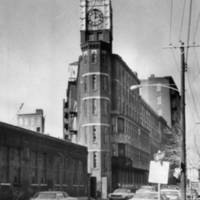 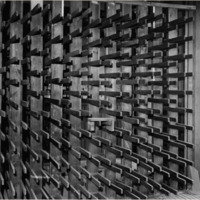 Hat forms in the Factory

The Stetson Company began manufacturing hats in Philadelphia in 1865. John B. Stetson moved production to the site on Germantown Avenue in 1874. Stetson died in 1906, but the firm he founded continued to flourish for many years after that, finally ceasing operations on the site in 1971. The plant at one time employed over 5,000 people and contained a total of about 1,400,000 square feet of floor space in its buildings. It was then (circa 1920) the largest hat factory in the world.

The structures on this site were also closely associated with Stetson's practices and innovations in labor relations. Here John B. Stetson established a building and loan association to assist his employees in the acquisition of houses and interest-paying savings funds. Stetson's workers received shares of common stock in the company, and Christmas gifts from the owner were distributed. (The latter included hats for single men, turkeys for married men, and gloves and candy for women.) More importantly, Stetson opened a free dispensary for his employees. The dispensary became a hospital in 1887. In 1965, the Stetson Hospital was fully staffed and accredited and had seventy-five beds. In addition, Stetson provided his employees with a library, and the immediate neighborhood, where many of his workers lived, with a non-denominational Sunday School, which was once the largest such institution in Philadelphia. 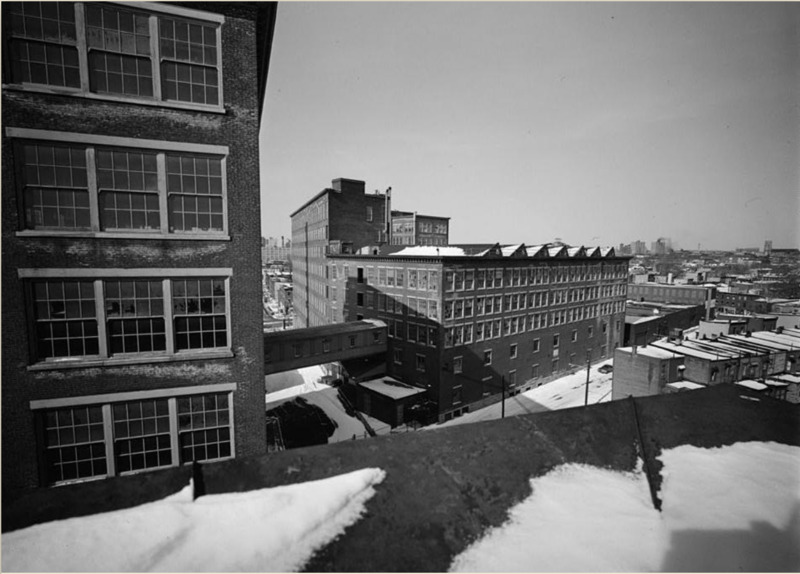 One of Stetson's problems was to train people to become good hatters. His business grew so rapidly that he had to encourage many hundreds of hatters to immigrate from Italy to Philadelphia. For the immigrants, he offered Americanization classes as preparation for naturalization. In May 1906, three months after Stetson's death, the 5,500-seat Stetson Auditorium finally opened with facilities for concerts, civic and patriotic programs, Sunday School classes, roller skating, dances, and annual Christmas gatherings.

In 1946 operations were expanded with the purchase of a hat plant in Danbury, Connecticut, but during the 1950s and 1960s, the trend toward hatlessness adversely affected the business. By 1965 the Philadelphia plant had proved too large to be economical, and in 1971 operations ceased. Plans by the Stetson firm to demolish the older buildings and adapt the newer buildings for other uses did not come to fruition. In the meantime, the City of Philadelphia arranged to use 63,000 square feet of the facilities for its U. S. Department of Labor-funded Manpower Training Program, spending over $250,000 on improvements before moving out in 1976. In May of 1977, the John B. Stetson Company donated the 8.95-acre site and the buildings thereon to the City of Philadelphia.

All except Buildings 10-13, and the Stepson Hospital, were demolished in site clearance by the City of Philadelphia in 1979. It was planned to preserve and rehabilitate Buildings 10-13, but they were destroyed by fire on September 4, 1980.