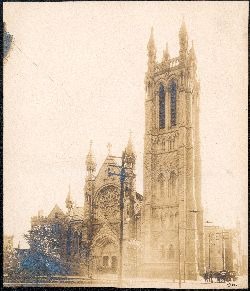 When you raise your eyes to the Eastern North Philadelphia skyline, Saint Edward’s belfry will stand out the most among the surviving spires and apartment buildings in the area. Like a tree in the middle of a field, Saint Edward the Confessor Catholic Church prevails as a landmark in this part of the city; with its 137-foot tower and almost 14,000 feet area, the church has a strong footprint in the community. The church was built in 1903, replacing an older structure.

Originally, the site had been the home to a protestant church, but in the late 1800’s the Archdiocese of Philadelphia --this region’s Catholic administration-- purchased the terrain and decided to build a new church that would serve the growing number of immigrants to this part of the city. It charged George Audsley to design St Edward’s, a renowned Scottish architect who had migrated to the United States in the 1880’s and who had developed a reputation as a skillful designer. Among the most famous of his works in Philadelphia is the Wanamaker Organ in the Macy’s building in Center City.  Audsley’s choice of a Neo-Gothic style for St. Edward is a common approach for Philadelphia churches at the time; it features a central rose window with three portals that lead to the nave and two side aisles on the inside.

A Setting for the Community

After its completion, St Edward’s church became a landmark in the neighborhood. For instance, in 1913 it became the home for a chapter of the Holy Name Society, a Catholic association for the practice of charity and piety. In 1982, the outside served as the setting for one of the final scenes in the movie, Fighting Back, a vigilante story about crime in Philadelphia. As most Catholic communities in the United States, this parish also offered primary school services. The Sisters of Holy Child Jesus ran this school, which reached its highest enrollment in the year 1970 with 1517 students. By 1976, the enrollment dropped to 355, hinting at the church’s decline.

St. Edward’s closed in 1993 as part of a process in which the Archdiocese closed many churches in North Philadelphia. While the building was not demolished, a Pentecostal worship house bought this property later that decade, naming it the Highway Temple of Deliverance. Unfortunately, in 2013 the new owners could not keep the maintenance costs and the church went on sale again, still waiting on its uncertain future today.